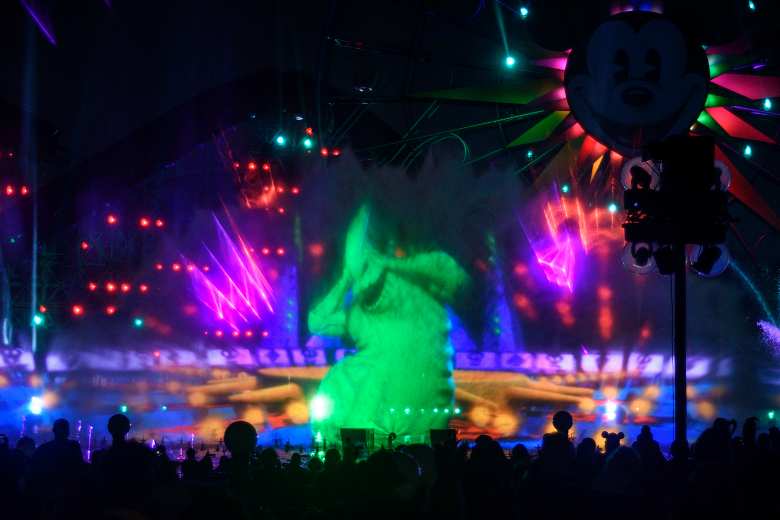 Disney’s new Halloween party hosted by monster of scare-e-monies Oogie Boogie from “The Nightmare Before Christmas” has debuted at Disney California Adventure with a villain-themed “World of Color” show and “Descendants”-inspired dance party.

The new “World of Color: Villainous!” nighttime spectacular follows the twisted tale of a young girl named Shelley Marie on a journey exploring the villainous side of Disney characters.

The DescenDance dance party on the Hollywood Land backlot features songs from the Disney Channel’s “Descendants” films and the Isle of the Lost dance crew.

Disney villains like Ursula, Scar and the Queen of Hearts pop up in ethereal dreamlike scenes in Villains Grove, complete with lights and music along the Redwood Creek Challenge Trail.

Characters like the Mad Hatter from “Alice in Wonderland” and Oogie Boogie from “The Nightmare Before Christmas” lined the trick-or-treat trails throughout the park.

The Frightfully Fun Parade returns from Mickey’s Halloween Party with the Headless Horseman of Sleepy Hollow leading the procession, Mickey and Minnie in Halloween costumes, characters from “The Nightmare Before Christmas” and a host of Disney villains.

Meet-and-greet photo ops were offered with Disney characters in Halloween costumes as well as Disney villains throughout the park.