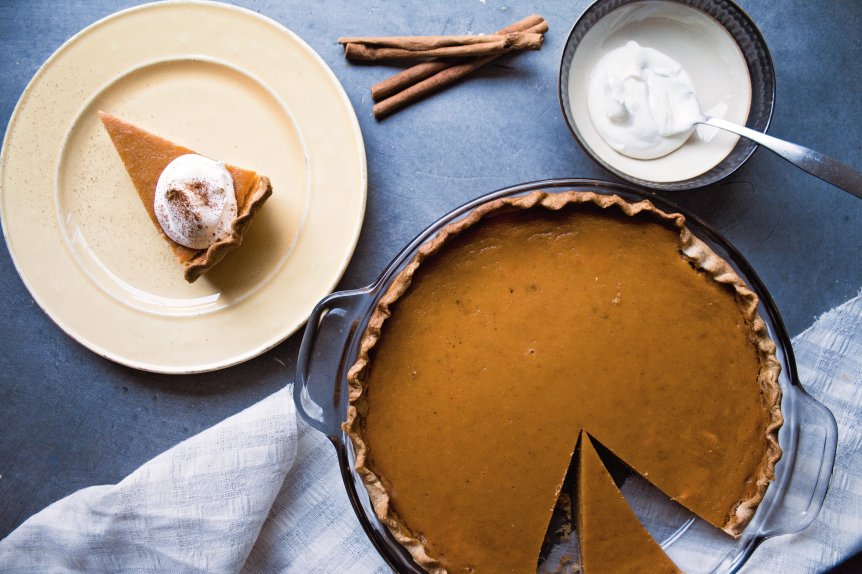 Rev up that rolling pin. It’s officially pie season, and if you’re like us, you’re craving something a little different this year, whether it’s a twist on an otherwise one-note fruit pie or an all-out holiday showstopper.

Before you go down the dark pie hole that is Pinterest, consider inspiration from a Bay Area blogger, like Milk & Cardamom’s Hetal Vasavada, and her Indian twist on sweet potato pie, or a genre-defining cookbook — we can say that, can’t we? — from the pie perfectionists at America’s Test Kitchen.

Want your lattice crusts to look like the ones in your Instagram feed but have no idea where to start? This book offers step-by-step guides to every critical drape, fold and bend, in addition to tips and tricks to prevent common pie dilemmas, from cracked custards to “weeping whipped cream.”

“A pie is work,” says Christie Morrison, senior editor of special projects for America’s Test Kitchen. “You have to make a crust. You have to make a filling. But you can do the whole thing ahead of time. The cooks working on this book actually took a day and made a ton of pie doughs so they could just take them out of the freezer, defrost in the fridge and get going.”

ATK’s go-to dough, a supple, all-butter, single-cruster that’s easy to roll out, can be made and stored in the freezer for up to a month, or up to two days in the refrigerator. That’s an eternity in holiday cooking time, when you need those precious early morning hours to tackle your turkey.

If your clan prefers pumpkin — according to America’s Test Kitchen, 88 percent of Thanksgiving pie eaters prefer that classic — but longs for some texture, ATK’s Pumpkin Praline Pie is the answer. The combination — it’s like “pumpkin pie and pecan pie got together and had a pie baby,” Morrison says — satisfies with its combination of silky spiced custard and crunchy streusel-like topping. That topping also resolves a common baker complaint: Cracking around the edge of the custard.

“If your big fear in life is that you’ll have a visible crack in your custard, this is the best cover up,” Morrison says.

However, if you want a pie worthy of front-and-center selfies, consider the cookbook’s Pear-Butterscotch Slab Pie, which features beautiful pie-dough cutouts in the shape of fall leaves. The pie uses seven Bosc pears, sliced super thin, and a trio of warm spices, including one you don’t see in typical apple desserts.

“Apples get all the glory in the fall, but pears are fantastic in pies, too,” Morrison says. “This pie combines pears with unexpected spices, like star anise, and then drizzles the fruit with the kind of butterscotch sauce you want to drink as dessert.”

For many families, the perfect wintry dessert is something comforting, like sweet potato pie, with generous dollops of fresh, whipped cream. Vasavada, the Belmont blogger behind Milk & Cardamom, recalls her father roasting pounds of sweet potatoes on the stove during the fall and winter months of her childhood in New Jersey.

“We’d sit in a circle around him while we carefully peeled the skin off the hot sweet potatoes and ate them,” she recalls. “When I was really little he’d peel them and blow on them until they were cool enough for me.”

The sweet potatoes that didn’t get eaten were mashed and put into her mother’s sweet potato halwa, a dessert made with cardamom.

You’ll find the recipe in Vasavada’s cookbook, “Milk & Cardamom: Spectacular Cakes, Custards and More, Inspired by the Flavors of India” (Page Street Publishing, $22), updated with the addition of ginger and cinnamon and baked into a simple, buttery crust.

“I decided to convert it into a pie recipe and re-create the flavor of those sweet potato nights as an ode to him for the holidays,” she says.